Energy Use of Bitcoin

It seems proponents of BTC think that it actually has a net positive on the environment. Which is absurd to me, especially when the arguments are rather weak, and lack sources.

Update Feb 15, 2021: Here's a much better written analysis of Bitcoin energy use: Bitcoin and other PoW coins are an ESG nightmare

Perhaps, one could argue that the energy consumption of BTC is lower than what deterrents claim. But, proponents propose that BTC is actually a net positive for the environment! This misses the very large point that any energy increase is contrary to a climate safe future.

Conceptually, this is an interesting topic. But this is a misdirection. Comparing the entire historical impact of gold and fiat systems doesn't help us. We can learn from the past, but not undo it. Doesn't it make more sense to compare the annualized running costs of our fiat systems vs. that of BTC? Does the current annual running costs of gold backed currencies use more energy than BTC? Especially when you scale them to be 1-to-1? If BTC uses the energy of a small country today, what will it need if it were the global currency? Or even in use as much as the USD or Euro?

I have yet to find any peer-reviewed studies examining the energy use of our fiat systems. But, this article claims:

So total consumption for [global] banks during a year only on those three metrics [servers, branches, atms] is around (I am rounding) 26Twh on servers, 58Twh on branches and 13Twh on ATMs for a total of close to a 100 Twh a year.

Wow. Currently, the CBECI puts the annualized consumption of solely the BTC network at 121.19 TWh. If we added BTC ATMs, or data center consumption for exchanges and wallets, it would be even higher!

While the environmental history of gold is bad, it should not serve as a baseline for what BTC can consume. Why should there be any leeway for continued environmental degradation and carbon emissions?

There are studies published outlining the excess energy use and e-waste of BTC. But, the criticisms always seem to be tweet storms.

Bitcoin’s energy consumption is trivial compared to legacy financial systems. As measured by electricity costs alone, Bitcoin is much more efficient than traditional banking and gold mining on a global scale.

That's incredible! But wait... are they comparing current Bitcoin use to that of the global financial systems? That's not a comparison at all, now is it? Well, let's check the source. Oh it's a Medium article... One of the sources, links to another Medium author's homepage, so not even a specific post. Great.

Okay, finally it does link to something with some reputability. Which reports that the efficiency of ASICs is slowing the rate of consumption as BTC grows. Sweet, but it's still adding the global energy use baseline? Oh, and those ASICs are single purpose electronics that have an estimated lifespan of 1.5 years!

Have BTC proponents addressed the issue of the estimated 10,948 metric tons of e-waste produced by mining operations?

Many argue the benefit of a new currency outweighs the negative aspects of energy use and e-waste. But, I guess it depends what's more pressing or important to you? To accrue wealth in a new system, or to prevent 2 degree warming for our planet? Many are suggesting the latter may be more important...

Fifty-one billion is how many tons of greenhouse gases the world typically adds to the atmosphere every year. Zero is what we need to aim for. To stop the warming and avoid the worst effects of climate change, humans need to stop adding greenhouse gases to the atmosphere. The climate is like a bathtub that’s slowly filling up with water. Even if we slow the flow of water to a trickle, the tub will eventually overflow. Setting a goal to reduce our emissions won’t do it. The only sensible goal is zero. -- Bill Gates

But, even before answering that. The most egregious claim by Dan Hedl: 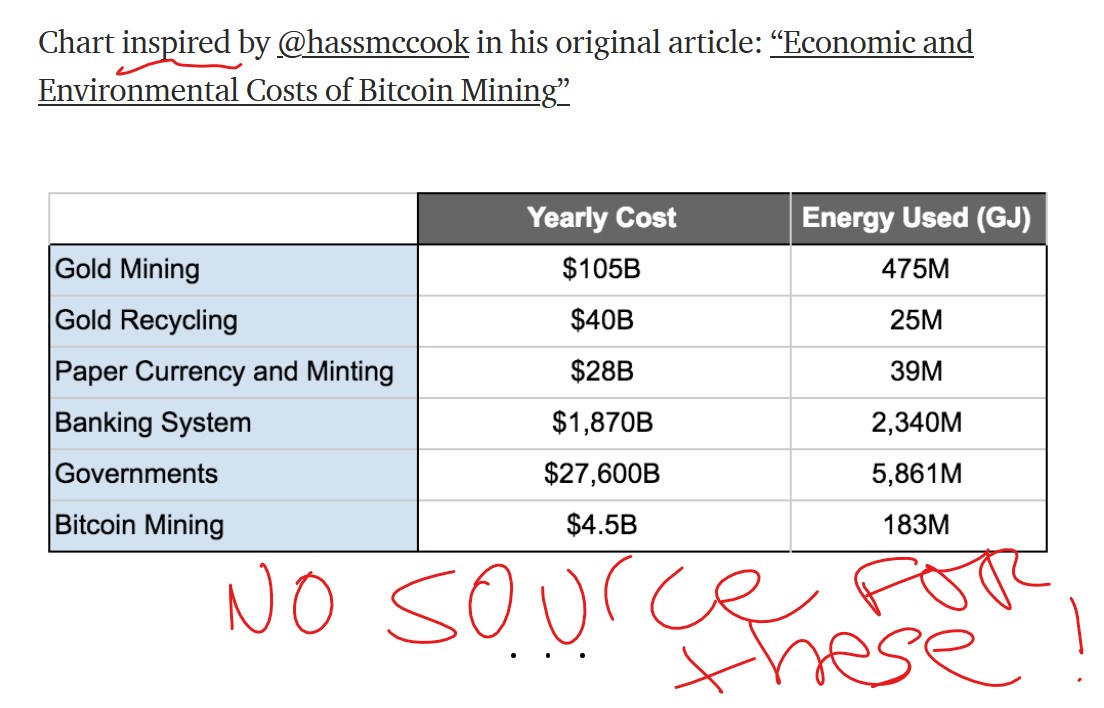 Where he insinuates that a Coindesk article is the source. Yet, while his table is in the same style, there is no such table in that article. Nor, is there any source for the numbers for Gold mining, Governments, etc. WTF!?

Why should I trust these Tweet Storms and Medium articles when they lack proper sources and do not have the reputability of a published study?

Next up Some Keystone Xl Maths